For the past couple of months I have been seeing a new surge of fitness related fashion. Some of it’s functional, some of it’s fashionable and some of it is slightly freaky. I’ve steered clear of the freaky fitness torture devices like TV fitness programs and bodywraps, but the fashionable and functional pieces finally merged into one practical device – the fitness tracker. Now, fitness trackers have been around for awhile in the form of clip on pedometers or gigantic watches – but the new round of trackers are sleek, small and will change your life.

There are an almost endless list of trackers, like the Basis B1, the Polar Loop, and the Nike FuelBand. However, as an average Jo, or Josie – I wanted something a little less hardcore. Which is why I gave the Jawbone UP ($129.99) and the FitBit Flex ($89.99) a try. They’ve both been given comparative reviews by other more knowledgeable fitness gadget reviewers, and they both look pretty spiffy.

I originally got the Jawbone UP24 ($149.99) for a Christmas present and immediately realized what everybody was raving about. Having an all around fitness tracker tracking your everyday activities sounds excessive and pointless at first and I originally thought it was a pretty silly invention – couldn’t I just track what I was doing in my head? What I learned is that having a tracker (that doesn’t lie, exaggerate or make excuses) taught me that I really had no idea what I was doing on a daily basis. My habits were revealed and I learned that I was walking way less than the average 5,000 steps, and my sleeping habits were atrocious.

Both the Jawbone and the FitBit connect wirelessly to an app on your phone that keeps track of your sleep (the basic Jawbone UP only connects when plugged in), the quality of your sleep and how many times you woke up, your steps, your mood and your food. Each of the fitness bands has their own advantage, but the basic tracking mechanism and insight into your daily movements and habits are basically the same. Their interfaces are slightly different. While the Jawbone is more of a Facebook type scrolling design, the FitBit compares and tracks in a more organized and detailed way.  Wearing the band 24/7 is important – because the software then looks at the data, determines your habits and often times suggests changes to your daily activities. Last night the Jawbone suggested I get to bed at 11:11 p.m. I did, and I feel fantastic today! (Thanks for the suggestion, you were right Jawbone)

What I like about the Jawbone is the usability of the app and the fact that it gives the wearer goals. It lumps sleeping and walking into two different categories based on daily goals (Mine are eight hours of sleep and 10,000 steps for both devices). Throughout the day the app connects to the band via bluetooth and gives you a percentage of your goal that you have accomplished. You can also program it to vibrate at different time increments if you’ve been especially sedentary. This is nice because of the arbitrary goals – I love pointless goals, for some reason I get obsessed with silly things like that. When I run, I always run to the next street or the next pole, and then continue doing that to myself until I’m either exhausted or home. It’s the same with the app – if it’s 9 p.m. and I’m only 80 percent through my walking goal, I’ll get off my butt, put on some shoes and walk around the neighborhood until I hit 100 percent and it sends me a “Success, you’re AMAZING!” text. (The FitBit does a happy dance and vibrate when you hit your goal) It’s pretty funny how that little text keeps me motivated all day long. It also sends fit tips to your app every day based on your habits that tell you your weekly steps or sleep roundup, give you suggestions on when to go to bed and are often packed full of cool food or fitness trivia.

The FitBit is good because of the fact that the band itself tells you how far you’ve walked or how long you’ve slept. The Force, which was recently recalled gave a more in-depth review on the face of the device while the Flex indicates how far along you are with dots. Unfortunately, the Jawbone doesn’t have a display, therefore making you totally dependent on your phone app. The FitBit also tracks floors walked up, active minutes and steps as well as  more in-depth food tracking and even gives you the option to make a food plan and track the amount of water you’ve had. It also puts more of a focus on your weight, and can even wirelessly synch to a scale ($129.99)! Now if only it connected to my WeightWatchers app it would be the most amazing invention ever. The FitBit also gives you badges for hitting certain milestones – which, when using an app is pretty pointlessly (yet wonderfully) exciting. 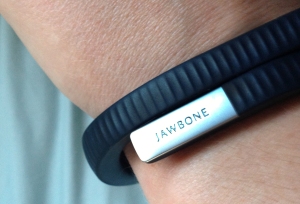 Both of the products help you connect and compete against friends – which can be another little push to get off your butt and walk the neighborhood. I personally compete against my husband and my gung-ho step-crushing Aunt. On an average day she can walk five to 10 miles – which is soul crushing but also fun competition. I have different friends who use certain fitness trackers, so if you’re wavering between the two you might want to find out if the majority of your friends use one over the other. I seem to have about the same amount of friends who use both bands, making it only beneficial for one because my husband also has it. They both also vibrate to wake you up at the optimal time in your sleep cycle which is less jarring than my regular alarm, but much easier to ignore.

To me, the style factor of the two bands is pretty similar. I like the FitBit because of how sleek it is, plus it comes in a variety of colors (that you can interchange) and you can see your progress on the small screen- but, the clasp is sometimes hard to attach. The Jawbone however doesn’t have a screen to see your progress, but it’s easy to take on and off and if you get the black one it’s also very indiscrete. Both come in different colors, and the water resistance factor can be debated for both. Basically, water won’t ruin them, but be careful. Don’t go scuba diving or swim in a pool with them on.

Basically if you’re questioning getting the FitBit verses the Jawbone you have to ask yourself – do you want more in-depth tracking that you can see in real time on the band (FitBit) or do you want to be more motivated to hit certain goals (Jawbone)?

While there are MANY fitness tracking devices out there, I would highly recommend buying one that goes around your wrist, not one that clips to your pants, (your bra) or your belt. I think the Jawbone and the FitBit Flex are the top two options for somebody who wants to know their daily habits and make positive, healthy changes. They’re a great tool to help understand your daily activities and make small changes that add up to make a big differences in your lifestyle.

Jawbone UP24 and Fitbit Flex

*RadioShack has provided me with samples of the Jawbone UP and FitBit Flex for purposes of providing a review. I received the product at no charge to me and I am under no obligation to return the product but can keep it for my own personal use.